Back in the late 1980s, I bought a lake property with several acres attached.  The extra acreage was heavily wooded with maple, oak, basswood, poplar, sumac, and other deciduous trees and shrubs.  There were also two ponds that usually had water in the spring, but would dry up by early summer leaving only gray/brown marsh grass.  After a few years, I built a cabin near the lake, and cut trails through the woods for hiking in the summer and cross-country skiing in the winter.

One late autumn day a stranger knocked on my door.  He identified himself as being with the U.S. Fish and Wildlife Service.  He told me his mission was to restore wetlands that had dried up due to environmentally damaging agricultural practices.  He said he could build a levee across the small stream which flowed to the lake in the spring, thus stopping the flow of the water out of the pond.  The result would be a year-round pond with a depth of 2 to 3 feet.  He assured me that in the spring, waterfowl such as kingfishers, ducks, geese, herons, and swans would likely return to the area to nest, mate, and raise their young.  Best of all, he said all the costs would be covered by a grant from the U.S. Fish and Wildlife Service!   I said, “Sign me up!”  A week or so later, they built the levee.

In late April, after a long winter with lots of snow, spring arrived and the ice melted.  Sure enough soon afterward birds arrived–wood ducks, mallards, a pair of geese, and a great blue heron.  I was thrilled and enjoyed my early morning hikes to view the wildlife throughout the summer.  By late fall, I noticed a number of poplar trees downed along one edge of the pond.  I concluded from a distance that they had simply fallen over from having their roots rot in the new pond water.

Winter arrived with freezing temperatures.  After the first heavy snowfall, I fastened my cross-country skies to head down the trails that crisscrossed the property.  The pond had iced over, and I realized I could ski along its entire periphery.  As I did so, I approached the fallen poplar trees I had only seen at a distance from the township road.  To my chagrin, I saw that the trees had been felled by a beaver! 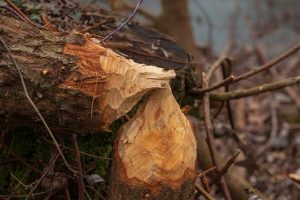 I skied further along the edge of the pond, and sure enough, there lay a beaver house.  The beaver had lived up to the adage, “busy as a beaver,” it had felled dozens of trees and built a rather palatial dwelling.  I immediately felt invaded.  This unanticipated and unwanted intruder was altering my landscape without my permission.

How often do we make choices without a clue as to what the longer-term consequences might be?  We think we are making the right choices, then a beaver shows up–a glitch or curveball in our perfect plan.  There is really no way of knowing for sure how our choices will play out.  This is why so much of life must be lived on faith. Here I was, faced with another choice–to save my beloved trees or embrace the beaver as Mother nature’s plan?  I will not say what the beaver’s fate was, but I will say every new choice has new consequences.  No matter how thoroughly we have planned.  No matter how many possibilities we have anticipated.  No matter how much research we have done or how many experts we have consulted, usually, a beaver shows up.  In fact, you can count on it!