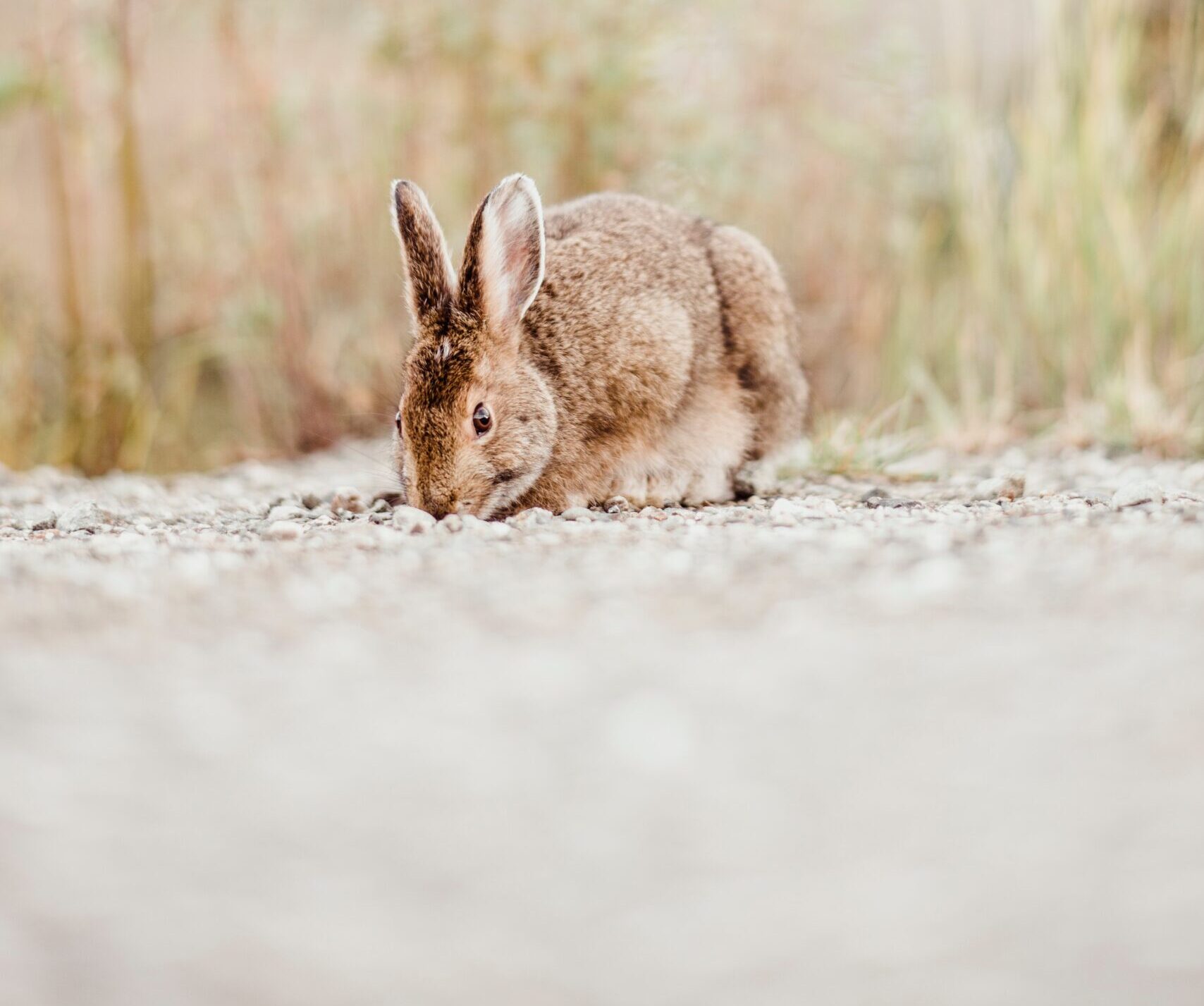 At the lake, there are dramas every day on and around the bird feeders, especially during the winter months.  In winter, the main bird visitors are chickadees, nuthatches, dark-eyed juncos, blue jays, and a variety of woodpeckers and sparrows.  Some are strictly ground feeders like the juncos and jays.  The house finches mostly eat directly from the feeders.  They sloppily drop as much seed as they consume, thus allowing those below to eat heartily as well.  Besides the birds, there are squirrels (gray and red) and rabbits.  No matter whether feather or fur, all the creatures have their pecking order amongst themselves.  The big gray squirrels are the most dominant–unless of course a bald eagle or fox unexpectedly appears!

Today a dominant gray sat at the cracked corn I had recently scattered on the ground beneath the feeders.  He ate heartily and contentedly because he had chased away all intruders and rivals.  However, after a while, a rabbit appeared on the periphery.  He gradually worked his way toward the cracked corn and sunflower seeds.  The big gray squirrel eyed the rabbit antagonistically but kept eating.  The rabbit hopped a little closer, and at that instant, the squirrel charged the rabbit.  I was astonished at what happened next.

The rabbit did an 18-inch vertical jump.   The squirrel zoomed right under him, screeching to a halt about two feet from his target!  The squirrel spun around, and there sat the rabbit right where he had been before the squirrel had charged him.  (I swear, if animals are capable of doing a double-take, the squirrel did one!)  The squirrel charged again.  Same result–the rabbit jumped straight up and the squirrel flew under him.  After a few more attempts with no effect, the squirrel settled in an area nearer the feeder.  The rabbit kept nibbling freely as if nothing had happened.

I thought to myself, “That rabbit has perfected the skill of nonviolent defense!”  What a demonstration!  What if people could find similar ways to simply allow a perceived attack to pass under, around, over, or through them?  What if an insult was returned with a blessing?  Or what if a rude checkout clerk was shown kindness?   What if all perceived attacks are actually pleas for help stemming from fear?

I remember a time I was working as the consulting psychologist to an adolescent in-patient treatment facility.  We had a 15-year-old girl named Brenda, who was very difficult.  She had involuntarily been placed in treatment by her mother.  Angry, belligerent, disrespectful, and uncooperative, she was frequently the subject of conversation during our staff meetings.  I think because I was a consultant, and not responsible for disciplining her, she began confiding in me somewhat.

Whether it was because of our sessions, or due to her figuring out what worked to get her way, she eventually behaved cooperatively long enough to earn her first-weekend pass to visit her father.  I was on the unit that Sunday when a distraught staff member came to me and asked me to take a phone call.  It was Brenda’s father and he was irate.  Apparently, she had told him all sorts of horror stories about her treatment on the unit.  He was threatening to pull her from treatment, call his lawyer, or call the police.

When I took the phone and introduced myself, he immediately launched into a tirade of accusations and threats.  At first, I tried to explain that Brenda might be exaggerating things to get out of treatment and to reassure him that the staff here was ethical and that no one was handling her inappropriately.  This only incensed him further.  Then, thankfully, I recognized this father was genuinely fearful for his daughter’s well-being and that he needed to feel heard.  Instead of defending the program and staff, I chose to thank him for his call.  I told him I greatly appreciated his call, and that he was the first parent I knew of who actually cared enough to call and ask about his child’s well-being.  At that point, he made a 180-degree turn.  He calmed down immediately and began expressing appreciation that we were trying to help Brenda.  I told him I would personally bring up Brenda’s complaints at our next staff meeting, and I would get back to him to discuss how to move forward with her treatment.  We ended the call very amiably.

What I at first perceived as an attack was actually a plea.  Brenda’s father wanted reassurance his daughter was safe, and I think he also wanted to believe he and his ex-wife (Brenda’s mother) had made the right decision to put her into treatment.  Once I saw the truth of the situation (it was a plea and not an attack), and responded accordingly, peace and harmony arose immediately.

Now I seriously doubt the rabbit saw the squirrel’s behavior as coming from fear of not having enough!  What I am sure of is the rabbit’s nonviolent response to the big gray defused the situation and ended with no harm done.  What I am also sure of is the more we are willing to relinquish our belief in attack and to recognize it for what it really is, a plea, the more we become capable of de-escalating conflict and promoting understanding, acceptance, harmony and goodwill.  (To learn more about relinquishing the belief in attack, go to the post “The Three Practices.”)