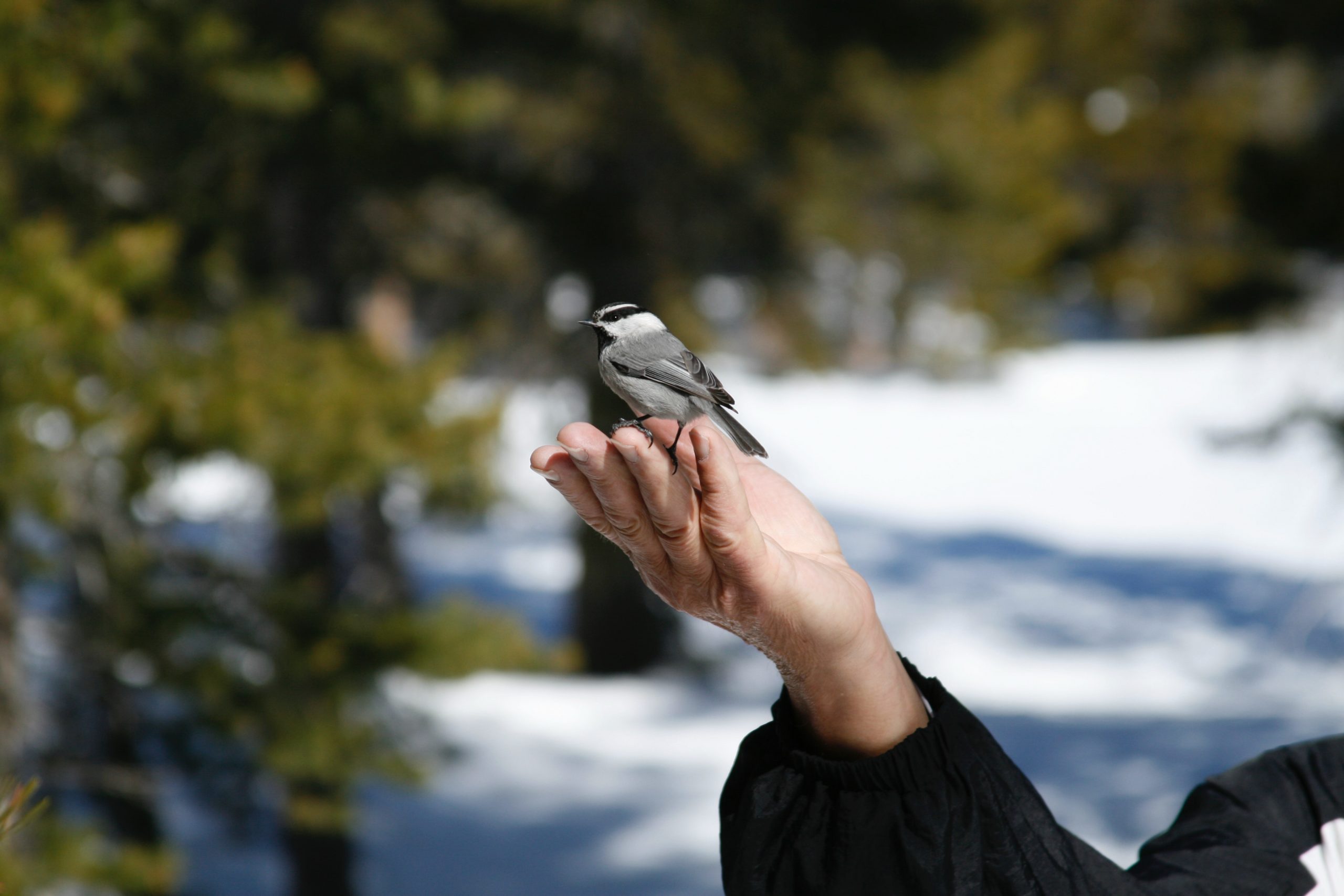 Back around the year 2000, I was building an addition to my lake cabin which consisted of a double garage and above it a master bedroom and bath.  The addition was in an early stage of construction, so it had a roof with open rafters upstairs.  The windows and skylights were already in.

One morning I heard a rustling sound upstairs.  I walked to the foot of the stairway to listen.  I kept hearing the scratching sound, so I started up the stairs to see. Thinking it might be a bat, I proceeded cautiously.  Previously, I had had a few unnerving encounters with flying bats!  Then I saw it.

A chickadee!  He had flown through the open garage door and up the stairwell to the second floor.  He must have quickly realized he was in an enclosed place so he was flying into the skylights and windows, probing and pecking for an opening to escape.  I went back downstairs and opened the other garage door, hoping he would see all the open space below him, and he would fly out to freedom.  Alas, he soon got himself wedged inside a soffit, and I heard him scratching and scrambling to free himself.  I pulled over a nearby step ladder, climbed to where he was, and gently grasped for him to lift him out.  As I reached in, he bit, pecked, and scratched at my fingers.  I quickly withdrew my hand.  In his fear, he saw me as more danger and harm, so he retreated to where I could not reach him.  I decided I best leave him be, and hoped he would work his way out of his predicament.

Later, I thought about our encounter, and how the chickadee behaved just like people when they are afraid.  So often, we perceive attack when, in fact, someone is reaching out in love to soothe, comfort, or save us from ourselves.  Instead of letting go and surrendering, we defend and attack, so we stay trapped right where we are.

Over the years, I have come to believe that all human behavior is one of two types–a gift or a plea.  If this is true, that means there is no such thing as attack!  To perceive an attack is a choice we make based on our belief system.  To relinquish the belief in attack is a radical change, and even the thought of such a shift triggers immediate anxiety and resistance.

Although discarding the belief in attack is radical, it is not new.  In fact, it is quite ancient!  Letting go of the belief in attack is simply another way of saying “turn the other cheek.”  There is a tremendous psychological payoff in discarding this deeply rooted ego belief and embracing the belief that all human behavior is either a gift or a plea, it is this.  You see the truth of every human exchange and you respond from the truth.  When you respond from truth, you become a healer, a harmonizer, a problem-solver, and a beneficial presence,

I wish I could claim to be so wise in my dealings with people, especially my partner.   All too often, I mistake a plea as an attack, and our communication breaks down.  I need to always be open to seeing things differently, to be willing to see only a plea or a gift, and to respond accordingly.  (Author’s note: I write about relinquishing the belief in attack in the article “The Three Practices.”)