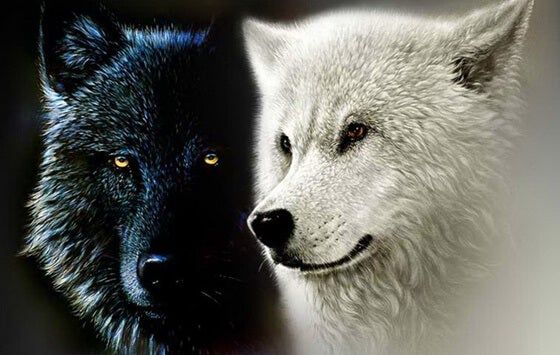 One day an old Cherokee chief spoke to his grandson and granddaughter.  He said, “You have two wolves battling each other inside you.  One is evil.  It acts from fear.  Therefore it is always hungry, wanting more, plotting and scheming to take from others, jealous, envious and hateful.  The other wolf is good.  It acts from fearlessness.  Therefore, it is always concerned for the well-being of others, promotes harmony and goodwill, and is generous, kind, gentle, peaceful, and wise.”  In unison, the granddaughter and grandson asked, “Grandfather, which one wins?” The grandfather replied, “The one you feed.”

We all have this “evil” wolf inside us, and that wolf is our ego.  I have written extensively about the ego on this website and I encourage you to read the many previous articles available here.  (See Iago or Ego?, Float Like a Butterfly, The Other Voice )  What is additional in this post is to reveal the ego’s role in a painful and pervasive contemporary psychological condition–clinical depression.

“I think I’m depressed.”  Have you recently said this to yourself or a friend?  Or has a friend or family member said this about themselves to you?  Or, has a friend or family member said to you, “You seem depressed?”  Perhaps you are taking antidepressant medication?  Maybe you are seeing a mental health professional for depression?  There is a lot of dark energy worldwide due to the devastating consequences of Covid-19, the divisive, hateful political rhetoric, the seeming uptick and intensity of natural disasters, and the acceleration of tyranny and oppression.  With all of this going on “out there,” it is easy to be distracted from the real cause of depression lurking within you–the ego.

There is a great deal of information about depression–defining it and treating it.  Just do a quick search on the internet and you will be astounded by what you find.  Nevertheless, I am going to provide a quick overview of some basic information about clinical depression leading into the breakthrough work by two psychiatrists that changed the understanding and treatment of depression, and how all research and treatment roads since then have led to the ego–the same as Frodo finally reaching the Gates of Doom and readying himself to face Sauron, the Dark Lord whose destructive power wreaked havoc, chaos, suffering, conflict, and despair on all who lived in Middle-earth.

The National Institute of Health posts the following symptoms for diagnosing clinical depression:

The Ascendance of Antidepressant Medication

The earliest but still widely held view of depression is that it is caused by a biological imbalance or more specifically, a chemical imbalance in the brain.  Most everyone in the medical profession, and especially the biologically-oriented psychiatrists hold this position.  This point of view quickly spurred the development of antidepressant medications as the primary way to treat depression accompanied by a rapid readiness to prescribe them.

With the introduction and marketing of more and more antidepressants (there are now 5 major groups of antidepressants with around two dozen individual brand names available), more and more people began taking them.  Statistics show that currently, in the United States 37 million adults are taking some type of antidepressant medication.  Studies of the effectiveness of antidepressants show between 35% and 50% of people taking them still have depressive symptoms.  Anecdotally, many of my clients seeking psychotherapy were already on antidepressants–some of them having been prescribed a half-dozen or more at different times.  Names like Zoloft, Lexapro, Prozac, Paxil, Effexor, Celexa, and Wellbutrin had become part of their everyday vocabulary.

A very large number of people, if they think they are depressed, will first talk to their family doctor–usually a family practice or internal medicine doctor.  Many of these doctors will first attempt to alleviate your distress and will recommend sleep and/or antidepressant medications.  This is especially true if you come in requesting medication because you want immediate relief from your distress.  Unless your symptoms are extremely intense such as being suicidal or being severely incapacitated, I urge you to consider an alternative.

Although antidepressant medications proved very useful in treating depression, they did not vanquish depression. The victory was like defeating Sauroman (relieving the symptoms of depression) rather than Sauron, the real source of all suffering in Middle-earth. What became undeniably clear was antidepressants were not the magic elixirs.  All of the heralded new medications still had adverse physical and/or psychological side effects, risks of abuse and addiction, and high rates of relapse after discontinuing the medication.  (An important note: Research shows a very strong link between depression and addictive behavior.  If you think you have an addiction, you should see an addiction counselor first.  If both depression and addiction are present, the addiction must be dealt with first.  I base this strong statement on research, training, and 35+ years working in the field of addictions.)

The real breakthrough in the understanding and treatment of depression began with the work of two pioneering psychiatrists,  Dr. Aaron T. Beck in his book Cognitive Therapy of Depression (1978) and Dr. Robert Burns in Feeling Good (1980).  They both proposed that the main cause of depression was entertaining depressive thoughts.  The focus shifted from the brain and body to the mind.  This shift led to the development of cognitive therapy for the treatment of depression,  Dr. Burns’ book became a best-seller, and hundreds of subsequent studies consistently supported his approach to understanding and treating depression.

How Does Cognitive Therapy Work?

Cognitive therapy for depression is more than looking at a person’s depressive thoughts. It may include modifying an entire thought system by uncovering the underlying beliefs that generate all thoughts.  What is a thought system?  A thought system is a set of beliefs ranging from core beliefs that are deeply held and of which you may be totally unaware to surface beliefs of which you are usually well aware.  Your beliefs are the source of all perceptions, emotions, thoughts, attitudes, values, and memories.  Yes, even how you remember events, people, transactions and outcomes are shaped by your beliefs.

Cognitive therapy changes the focus from treating your “illness” to collaborating with you to identify and modify how you think.  Many cognitive therapists view the symptoms of depression as a signaling system that is alerting you that something is wrong.  Johann Hari, a Swiss/British writer and journalist in his book Lost Connections (2018) represents this point of view.  What might be wrong is you are paying too much attention to depressive thoughts.  What may be wrong is you are in a toxic relationship.  Or maybe you are working at a job that is unfulfilling or unusually stressful.  Or, your depressive symptoms might be indicating you are refusing to face some painful truths about yourself.  Effective cognitive therapy eventually takes you to the core cause of depression which is your invalid beliefs and the thoughts and emotions they generate.  (So as not to be overlong with this article, I recommend you read an example of actually working with a depressed client using cognitive therapy in “The Tattoo.”)

The One You Feed

Your ego, the wolf or Sauron inside you, is a thought system built entirely on invalid beliefs because they are all fear-based.  I have already introduced and discussed those beliefs in a series of four articles beginning with “Iago or Ego?”  Here I am going to mention three invalid ego beliefs that are not core beliefs but are nevertheless powerful beliefs that are almost always present in clinical depression.

They are: 1) I have to be perfect, 2) I have to be right, and 3) I have to prove my worth.  Just ponder each of these for a while.  How could these beliefs lead you anywhere except down the road to depression?  No one will ever be perfect in this imperfect world.  No one will ever be right all the time.  Proving your worth is impossible because no one will approve of you all the time.  When you fail to live up to these invalid beliefs, which is inevitable and unavoidable, you unleash all manner of negative, dark thoughts that flood your awareness and beat you down until you become depressed.

The good news is you have the power to choose whether you listen to those thoughts.  Remember, the only function more powerful than belief is attention because the amount of attention you give to a belief either strengthens it or weakens it. (Read “Cherish is the Word.”)  Instead of helplessly accepting depressive thoughts, you can learn to step back from them, to trace them back to the underlying, invalid beliefs, to challenge those beliefs, and at last, to discard them once and for all.  With the help of a competent cognitive therapist, you, like Frodo with Sam Gamgee, will throw Sauron’s ring into the volcanic fires of Mount Doom and be free of it forever!  Oh, and do not forget, you have two wolves inside you.  Listen to the other one–the one that is fearless.